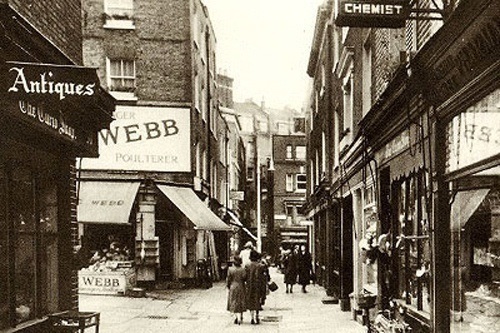 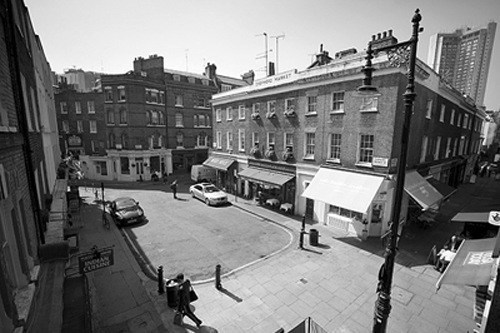 Shepherd market is a charming small square and piazza developed in 1735-46 by Edward Shepherd. It comprises a number of small side streets with a variety of boutique shops, restaurants and impressive Victorian pubs. This tiny little enclave is tucked away between Piccadilly and Curzon Street, in the exclusive borough of Mayfair.

Mayfair itself is named after the infamous fifteen-day fair that took place on the site that is Shepherd Market today. James II established the fair in the 1680’s, mainly for the purpose of cattle trading. Over the years the fair grew in popularity and size, attracting both rich and poor. Whilst Queen Anne tried to put an end to the fair, her successor George I was more approving. The gentrification of the area in the eighteenth century killed the festival off, with the building of many grand houses. A local architect and developer (Edward Shepherd), was commissioned to develop the site. It was completed in the mid 18th century, with paved alleys, a duck pond, and a two-storey market, topped with a theatre. The theatre was opened in the month of May, and attracted a much higher class of visitor than the noisy fair beforehand.

During the 1920's, Shepherd Market was an ultrafashionable address for some of London's most refined inhabitants, who lived there like characters in a play by Noel Coward. The writer Michael Arlen rented rooms opposite The Grapes public house, and used Shepherd Market as the setting for his best-selling 1924 novel “The Green Hat”. The book also went on to become a hit Broadway play and a film starring Greta Garbo.

The village-like area around Shepherd Market still has something of a colourful reputation. It was round the corner at 9 Curzon Place that Cass Elliot (Mama Cass) of The Mamas and Papas died in July 1974, and, four years later, Keith Moon, drummer with The Who, died of an overdose. In the 1980s Shepherd Market was where politician and best-selling author Jeffrey Archer met the prostitute Monica Coghlan, an encounter which he tried to cover up in a court of law, and which eventually led to his imprisonment.

Next to Shepherd Market is Half Moon Street, where the fictional Wooster (the perfect upper-class Mayfair resident and his faithful valet Jeeves) of P.G. Wodehouse's novels lived, and where in 1763 the real James Boswell (newly arrived from Edinburgh) took lodgings and wrote his defamatory diary. Curzon Street is home to Crewe House, originally built by Edward Shepherd, but now a company headquarters and one of the few eighteenth-century Mayfair mansions still standing.

Many locals describe Shepherd Market as ‘The Heart of Mayfair’. It is a truly unique and fascinating part of London that must be seen.

Shepherd Market was described by Arthur Bingham Walkley in 1925 as, “one of the oddest incongruities in London.” In the 1920’s, Shepherd Market was considered to be London’s most fashionable and opulent district by the city’s bourgeois social elite. How fitting that almost a century later, Walkley’s portrayal still rings true. Shepherd Market remains a peculiar and curious collection of charming alleyways, eclectic cuisine, 18th century pubs and discreet residences. The neighbourhood’s quaintness removes one from the congestion and urgency of nearby Piccadilly and oftentimes leads one to forget they are in central London at all.

Whilst much of the pomp and aristocracy once associated with Shepherd Market has migrated to central Mayfair, what remains is a refreshing and relaxing sanctuary for metropolitan escapees. The scattering of diverse restaurants around Shepherd Market’s main square and in its surrounding streets truly offers gastronomy to suit palates of any nationality and to accommodate any budget. So high is the density of eateries and so wide is the range of cuisine that one could easily pass by one of Mayfair’s greatest secrets unawares.

As unexpected as the hodgepodge of restaurants in Shepherd Market is the concentration and variety of shops. Not a single corner of the market is wasted. Every nook and cranny is filled with a sandwich shop or a barber, a newsagents or a boutique. There are stationery shops, cobblers and a pharmacy just a stone’s throw from high-end clothing stores, luggage makers and jewellers, the likes of which one would imagine might be more at home on New Bond Street. Such a strange amalgamation of amenities naturally attracts a diverse crowd to the area.

On weeknights, hundreds upon hundreds of suave employees from the so called, ‘Hedge Fund Alley,’ of Curzon Street pour into the market to sample the ales for a few hours in one of its 4 upmarket pubs before they commute out of Mayfair. On weekdays, the streets are sparsely animated by ‘working-lunchers,’ lost tourists, local businessmen and the occasional throng of Americans or Japanese participating in a guided tour. Despite the area’s unpretentious ambiance, its few roads are casually lined with some of the world’s rarest and most luxurious vehicles, a stark reminder of the enormous wealth lurking in the residences above eye-level.

At weekends, Shepherd Market transforms into a different animal. A completely new and distinct assembly of people arrives: meandering shoppers appear from Oxford Street and Bond Street and turn circles in the square, wondering where they have discovered; the pubs experience a shift in clientele to include residents, local church-goers and the odd parade-attendee who has tired of protesting and strayed from Piccadilly; the restaurants are filled with families of all nationalities and foodie couples, who have sought out their ‘secret’ central London getaway to eat and drink and to peruse the shop-windows.

Shepherd Market genuinely is the eye of the storm that is central London. It somehow weaves a wonderful, tranquil sense of village community into the fabric of the heart of the city. As one moves seamlessly from the congestion and frenzy of city life and into these delightful streets and lanes, it is easy to understand how this district became the secluded playground of the 1920’s bourgeoisie and how it has matured into the sophisticated but serene retreat that it now embodies.